Whether you choose one-on-one personal fitness training, boot camp or another group fitness class, or a running program, you’ll receive the attention needed to help you achieve your running and/or fitness goals. 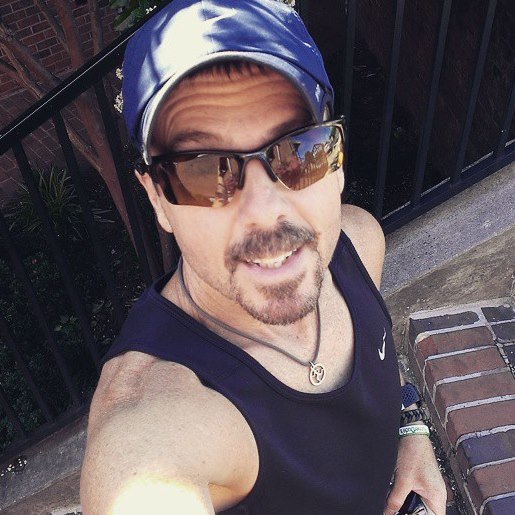 runnerdudesfitness@gmail.com
   
Thad McLaurin (aka: RunnerDude), his wife Mitzi, and their three kids have lived in Greensboro, NC since 1998. He’s come a long way since being “that overweight kid” as a youngster. After Weight Watchers® and a 40-pound weight loss in high school, he discovered running during college and has been passionate about running and fitness ever since. (Over 35 years!) It all started with the ’84 Great Raleigh Road Race 10K. He wasn’t fast, but he had a blast and was hooked.

13 years later, Thad caught the marathon bug. His marathon quest began with the ’97 NYC Marathon. Twelve years later, he’s run 15 marathons all over the country from NYC to Baltimore to Nashville to Honolulu, and San Fransisco! Plus one 50K Ultra Marathon.

A UNC Chapel Hill grad, Thad began his career as a 5th grade teacher for eight years before moving into the world of educational publishing where he worked as a writer, editor, and book development manager for 13 years before opening RunnerDude’s Fitness in 2010. Thad combines his love of writing with his love of running and fitness by hosting RunnerDude’s Blog (one of the top-ranked running blogs in the country) and he’s authored the book Full-Body Fitness for Runners (a USA Best Book Awards Finalist). Thad has been a contributing writing for Active.com and he’s also written articles for AmateurEndurance.com and Fitter U Fitness, and Canada’s IMPACT Magazine, as well as being featured in the “Ask the Experts” section of the July 2010 and May 2015 issues of Runner’s World. Through his blog (RunnerDude’s Blog), Thad’s had the opportunity to interview many of running’s legends, including Runner’s World’s Bart Yasso, Olympians Shalane Flanagan, Kara Goucher, Nick Symmonds, Zoal Budd, and Jeff Galloway as well as coaching legend Hal Higdon and Chi Running founder, Danny Dreyer, and many more.

Thad’s also active in the community and has been a member of the executive board for GOFAR, a nonprofit organization that prepares youngsters to run their first 5K! He also contributed to the GOFAR instructor curriculum manual. Thad’s also the founder and director of the annual event for runners and walkers known as RunTheBoro, a free event for the running and walking community that explores different areas of Greensboro.

Hear what some of our clients have to say about RunnerDude’s fitness. Click Here.

To learn more about Thad and his journey into the world of running and fitness, be sure to check out the article on RunnerDude in the February 2011 issue of Guideposts Magazine.